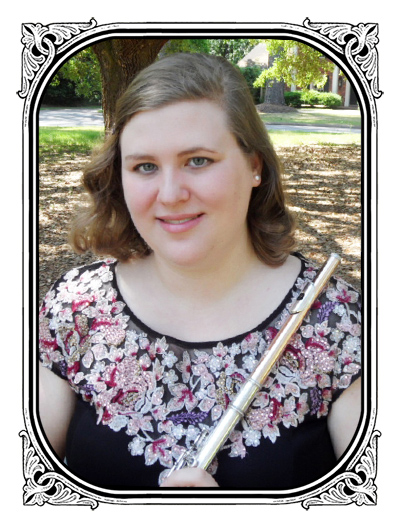 Erika Andres is an active flute performer and teacher in the Savannah area. Erika has played in many orchestras, bands, and chamber ensembles and is currently the flute substitute for the Florence Symphony Orchestra and co-founding member of the Silver & Strings flute and cello ensemble.   She is a great proponent of new music, being a performing member of the Flute New Music Consortium and a finalist for their first Flute Artist Competition.  As a Baroque flute player, she is an advocate for historically informed performances of early music on the instruments for which they were intended and has studied with the great Baroque flutists Stephen Preston at the Wildacres Flute Retreat and Eva Amsler at Florida State University. She has been a member of the Baroque Ensemble at FSU and is currently a member of the early music chamber ensemble Savannah Baroque. Erika holds an M.M. degree in flute performance from Florida State University and a B.A. in flute performance and music composition from Armstrong State University. Apart from performing, she maintains a private lesson studio, is a substitute music teacher for schools, and is the founder and president of the Savannah Area Flute Association.